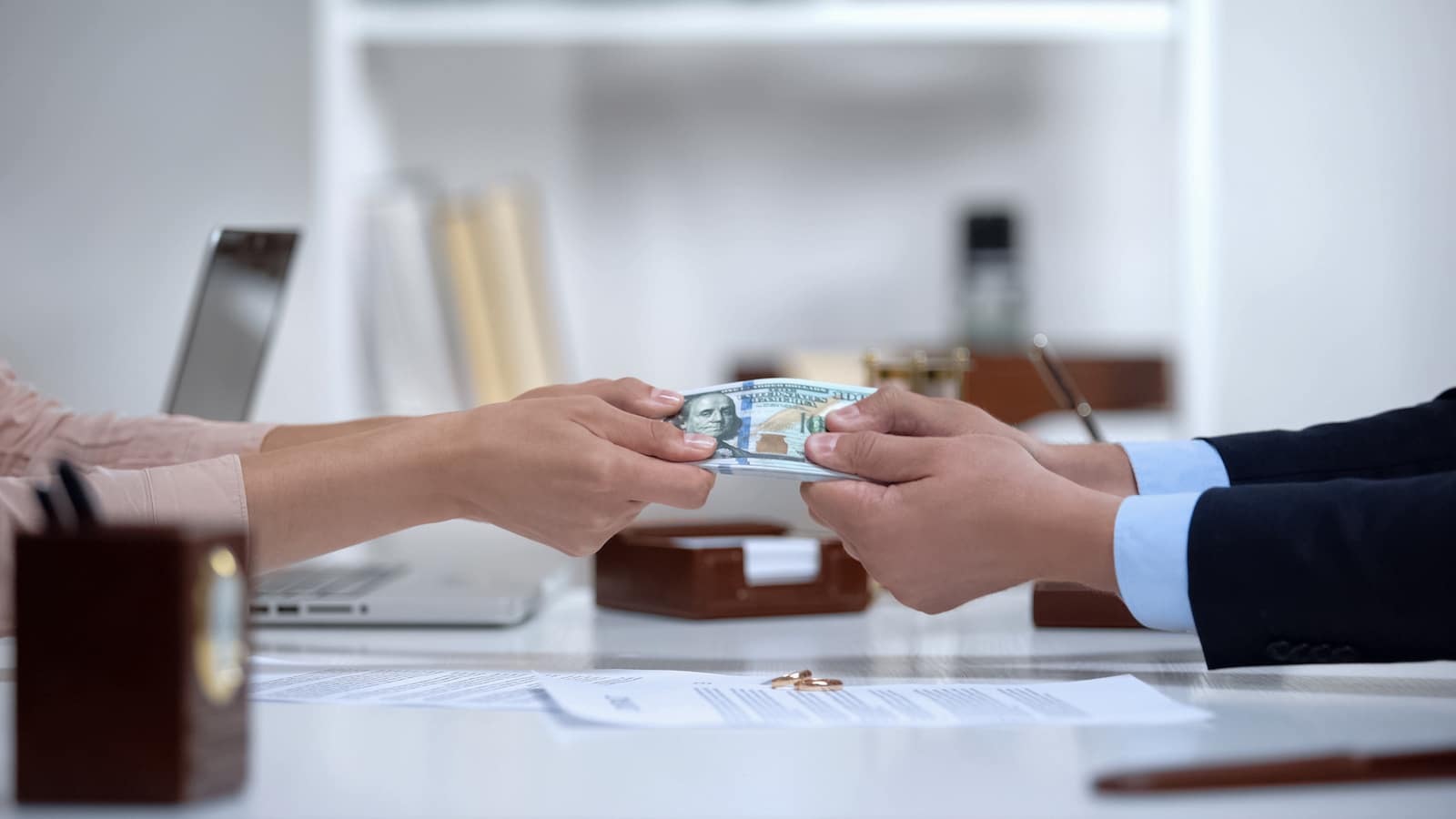 Dividing assets when a couple is getting a divorce is difficult to do. Emotions are high and divorcing couples rarely agree on what the other is entitled to. This process necessitates the involvement of lawyers whose job it is to be objective and bring to the table their knowledge of the law and their experience, while you bring the facts of your case. A lawyer will review all of the assets and debts the spouses have, the circumstances under which they were acquired, the presence or absence of prenuptial agreements, the length of the marriage and what assets each spouse wishes to keep. All of these factors are considered and weighed. Lawyers on both sides will argue on behalf of their client.

This article will provide some information and will explain in a basic way, how assets and debts are often divided.

An Overview of the Division Process and Considerations

How are assets and property divided in a divorce? In general, if the marriage has been of medium or long duration and there was no pre-nup, assets are valued, debts calculated and equity divided evenly. 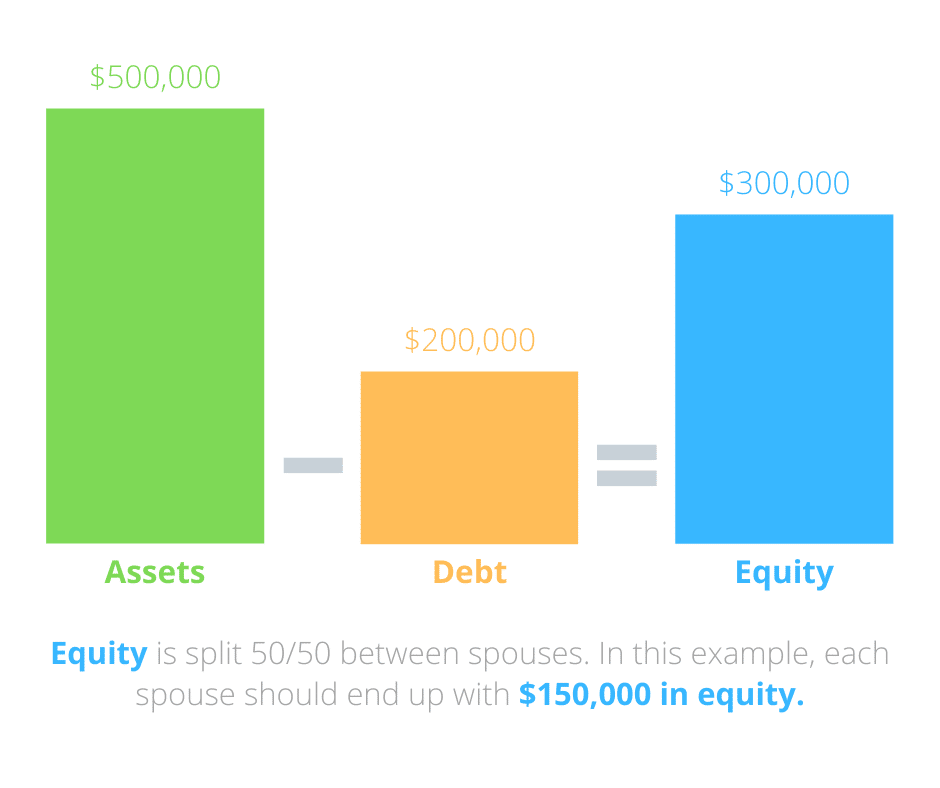 For example, if all of the assets combined (including the house, investments, vehicles, and bank accounts) is equal to $500,000 and the debts (such as those associated with the mortgage on the house and any lines of credit and loans) total $200,000 then there is $300,000 in equity to be divided between the spouses, which usually results in a 50/50 split. The key is that it is a balancing act, so for each major asset that one spouse gets, they usually have to give something up in return (this may be in the form of keeping the matrimonial home but forgoing an equal share in another asset).

There are ways of protecting yourself from this type of 50/50 split, such as a prenuptial agreement. This usually outlines the assets brought into the marriage by each spouse that are not to be divided upon divorce, as well as guidelines for how assets acquired during the marriage should be divided. The prenuptial agreement can protect you if you own your own house before the marriage, or if you have an inheritance that you would like protected.

When spouses divorce, one of the first issues that clients want addressed is the question of who will get the house. Sometimes this isn’t an issue, perhaps because one spouse chooses to downgrade if it isn’t financially feasible to live in the home and continue to pay the mortgage, but other times both spouses feel entitled to the home. Important considerations when discussing the home are whether one person owned it prior to the marriage.

Another area of contention in a divorce is who maintains ownership of the vehicles. Some families may have one vehicle, while in others, each spouse may have a primary vehicle that they regularly use, and which they would like to keep. Let’s say that during the marriage two vehicles were acquired, a 2014 Chevy Silverado and a 2016 Audi A6. You primarily drive the Chevy and your spouse primarily drives the Audi. The best way to provide your divorce lawyer with the values for these vehicles is in one of two ways:

With the latter, there may be some disagreement between the parties. Perhaps an Autotrader valuation of the Chevy states that it is worth $25,000 but your spouse believes it’s really worth $30,000. If there is disagreement then it is best to get an appraisal done. The reason there may often be disagreement is because of the balancing act between the assets and debts. If you and your spouse agree that you’ll each retain a vehicle then the next issue to deal with is figuring out what percentage that vehicle represents of the total assets. One spouse may assert that their vehicle has a low valuation, while the other party’s vehicle has a high valuation so that other assets will be given to them in subsequent negotiations. For example, if the Chevy is valued at $25,000 and the Audi is valued at $50,000 then your spouse will have more difficulty dividing the remaining assets equally since the Audi is twice as expensive. To balance this, the other spouse may then give up an asset (such as a bank account) with a value of $25,000 so that each spouse is getting $50,000 worth of assets. Alternatively, your spouse may have to take on a car loan amounting to $25,000 so even though they get the more expensive vehicle, they must take on the burden of a debt, which evens out. Now, suppose, your Chevy Silverado is leased; what happens then? It doesn’t count as an asset, because you’re renting that vehicle. Since you don’t own it, it can’t be divided or counted in terms of equity. So, now your spouse has the Audi valued at $50,000 and your vehicle has 0 equity because it doesn’t qualify as an asset. If you keep it, however, you take on the burden of monthly payments associated with it. As you can see, there are a multitude of factors that need to be considered when dividing these assets.

RRSP’s, TFSA’s and other bank accounts are flexible assets, in the sense that once the equity that’s tied up in physical objects (like the house or any family vehicles) is divided between the spouses, these financial accounts or any debts can be used to offset the remaining equity. For example, if one spouse holds $100,000 worth of equity while another holds $50,000, an RRSP of $67,000 (after tax value) may be divided to balance out the equity between the spouses. From there, the TFSA, other bank accounts and debts can be divided in a way that has both spouses at an equal amount of equity. For instance, if all of the assets including the vehicles, house and bank accounts amount to $500,000 and the debts, including the mortgage, car loan and lines of credit equal $200,000 then at the end of the day, the goal is for each spouse to leave with approximately $150,000 of the remaining $300,000 equity from the marriage.

Each divorce is different and must be assessed on a case-by-case basis. The above information is provided with the intention of showing, generally, how asset divisions are conducted and what factors are considered when dividing up the assets.